Loudon County entrepreneurs and slumlords, the Matlock brothers â€“ owners of Matlock Brothers’ Used Automobiles and the adjacent trailer park â€“ have filed suit in Small Claims Court against an alleged ghost inhabiting one of their dwellings.

After having several reputable families move in and out of a particular trailer within just a few months, one of the brothers inquired as to what was causing the virtual revolving door to turn once again.

“Hit’s that damn sperrit’s whut hit is!” was the wide-eyed reply from the former resident.

Upon investigation, the brothers discovered that there is a ghost, reputedly the spiritual remains of a Confederate soldier, inhabiting the trailer. Many of the people in surrounding homes have reported seeing the ghost, or hearing strange noises (other than empty beer cans hitting the windows) coming from the haunted single-wide.

After consulting with and lawyer and a specialist in the paranormal, and having discovered the name of the deceased soldier, the brothers decided to file suit for lost rental due to “a disturbance of the living quarters of the rightful lessees.” The name of the defendant has not been released at this time, but his heirs will be notified in the event the judgment goes against him. 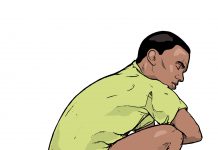