The Campbell Soup Company, a division of Franco-American, unveiled a new variety of its popular Spaghettios brand canned circular pasta in red sauce. The variety, named SpaghettiVols, will be available in finer grocery stores everywhere next month. In addition to the popular O-shaped bits of pasta, the SpaghettiVols will contain football shaped pastas, and a few V’s and L’s, borrowed from it’s Alphabet Soup. Company spokesperson Jane Seymore said that they originally thought “Vols” was pronounced “voles,” which made the name “SpaghettiVols” sound more like “Spaghettios,” but that it was too late to change their minds by the time they discovered the mistake. Due to a manufacturing process, some O’s came out rather football shaped, so instead of throwing them away a marketing staff member came up with the idea for a football-themed variety of the pasta.

Runners Heaven, or at least a place to buy supplies

Fuel prices got you down? 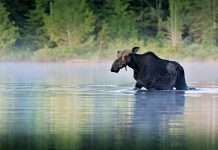