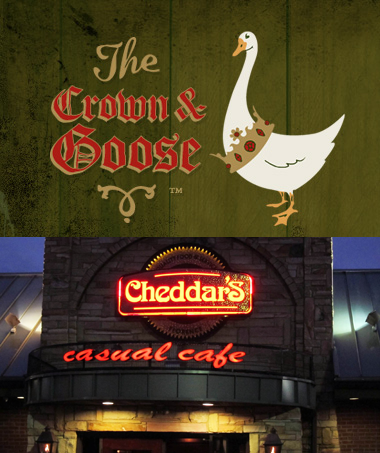 This week, news emerged that Randy Burleson, owner of Knoxville favorites Aubrey’s and Bistro By The Tracks, has purchased Old City’s standout, The Crown and Goose restaurant.  Many theories flew around social media as to what will become of The Crown and Goose now that Executive Chef Jeffrey DeAlejandro will no longer be guiding the creation of such delicious fare as their lamb chops, wings, and daily hummus specials.

Knoxpatch.com was able to sit down with Burleson to get a take on what his plans are.  “Well, we were looking at the menu trying to figure out how to move forward,” he explained.  “Then we noticed that just like The Crown & Goose, Cheddar’s restaurant has shepherd’s pie, fish and chips, and wings.  Suddenly it clicked!  We’ll convert it to a Cheddar’s!”

Cheddar’s is a delight to fans of bland food and 45 minute waits for a table, and other than Tupelo Honey Cafe, that segment in downtown Knoxville is not currently being served. “We will open up the Old City to a segment of Knoxville’s population that just hasn’t been served, up to this point,” Burleson added.  “Plus, we’ll make a LOT of money.”

The conversion is expected to take place sometimes this spring.